I talk a lot about following your dreams and pursuing your passions. You have read that I fully support my husband and his journey of becoming one heck of an awesome Whiskey Master Taster. By now, you may be getting the sense that I look forward to planning trips for my entire family to enjoy while still allowing time for distillery tours and whiskey tastings. But have you every actually wondered, “What do those two boys ACTUALLY think of their parents and the whiskey???” (If you haven’t, I bet I just put it into your mind!)

I strongly believe in transparency. I am an open book. And for better or for worse, that is how Josh and I parent. Open, honest, hiding nothing. I am not an expert parent. I am not perfect. I do have a lot of schooling that says I am knowledgeable in the areas of kids, teaching, counseling and coaching. But still, I can honestly tell you, Josh and I have had some major parenting fails. I hope and pray that Josh’s desire to educate others on whiskey is not going to end up as a parenting fail, or that my excitement to tie whiskey tastings into family vacations will not mentally scar my children!

So, what do Luke and Lane really think about the whiskey tastings?

Well, you can see from this picture that they get the chance to play on some sort of technology (they were playing on a Minecraft app!) Really though, that doesn’t add to their thoughts one way or another.

First, let me back up a bit…around 6 years backing up! Our youngest was 3-ish, probably edging close to 4 years old. We live near Olympia, WA where, once upon a time, Olympia Beer was created and produced. Olympia Beer is no longer in Olympia (having been bought out and produced back east, thus losing it’s popularity) the big brewery building lays deserted, decrepit, and a constant reminder of what used to be. Slightly down the Deschutes River is the old brick original brewery. You can see it from the freeway, or by taking in the lovely sites at the Tumwater Falls park or Pioneer Park, both in Tumwater. Well, when our wee one was such the young age as mentioned above, he was at the parks with his grandparents (my parents) and he told them, “See that building over there? I’m going to buy it some day and make beer.” Here’s the weird thing…he didn’t know it had been a brewery. Also, while my hubby did try his hand at brewing beer as a hobby (yes, this was YEARS before he became a Whiskey Lover!), our little guy did not know anything about breweries! Crazy!

That little guy is now 9 years old. He still constantly talks about the brewery he is going to buy. We take him often to look at this building. 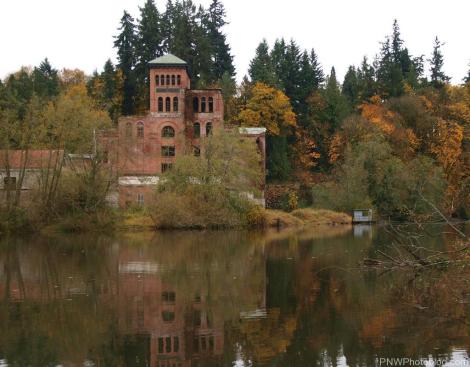 It is a beautiful building. And he has his business plan really laid out. Originally he was going to finance this dream by being a Seattle Seahawk football player first, but as he now realizes that is a long shot, and he is VERY talented in the world of Minecraft and all things technology, he figures he will go to college, get some sort of computer degree, be a YouTuber, AND find people that will loan him money to buy a brewery business and make his beer. Now that dad is quite knowledgeable in whiskey, our little guy said that by being a brewer, he can then distill. He also wants to have a restaurant in his brewery and says every Tuesday and Wednesday he will feed the homeless, but they aren’t allowed to drink any of his alcohol! Seriously, he has had this game plan for over half his little life now!

And the oldest child? He is into Agriculture and sees his future in Ag Engineering. He also had a long conversation with little brother on how he could be a business partner someday, ensuring the correct hops are found and purchased, that the barley, wheat, corn, etc for the beer and distilling were certified organic, and sourced locally. My boys have learned how many of the smaller distilleries we have visited sends the by product of the mash to nearby farms for their pigs and cattle to eat. Our oldest loved that and tells little brother that his services will be very useful with farm dealings. So, it sounds like this will become a family thing, someday!

As you can see, many dreams and passions are rolled into this Whiskey Loving adventure. Additionally, my kiddos have loved going on day trips, and longer trips, seeing new places, doing cool things in the towns and cities we visit. My oldest son would like everyone to know, “You must be responsible when you drink. But, you must be responsible with every thing you do. Don’t drink until you are legal. And never drink to get drunk, because then you act stupid and nobody likes a stupid person.” Preach it son!

One thought on “My Kids and thier thoughts on Whiskey”